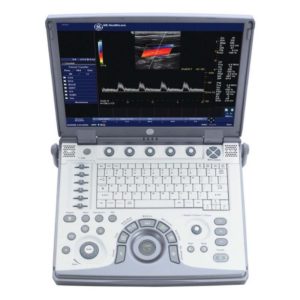 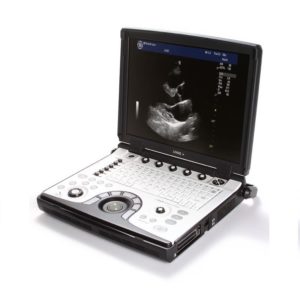 The GE Logiq e is perhaps the most well-known and best-selling portable ultrasound in the world. It is a midrange to an economy-priced system with a good balance between features and affordability. The average price range for a refurbished GE Logiq e portable is between $8,100 and $14,100, depending on the age of the system, the degree of past use, and its present condition, among other factors like which transducers are included. The Logiq e portable is a shared service system with GI, OB/GYN, and cardiovascular applications, although no 4D imaging. GE introduced the Logiq e as a replacement to the GE Logiq Book but with a more standard laptop-style form factor. If you’re interested in purchasing a Logiq e portable ultrasound, scroll below for more information or contact us today. You may also rent this model from Ultrasound Supply. 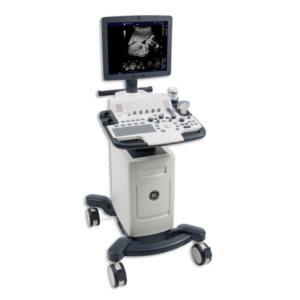 The GE Logiq F6 is a economy multipurpose system. Its performanc and capability are almost same like Logiq F8(Elder brother) except some hardware limitations such as LCD touch panel, articulate arm, and probe ports, etc. In terms of system performce, it performs exactly same like F8. It stengthens the fundamenation quality of all needs for daily practices as a multipurpose ultrasound with excellent imagq quality and easy workflow that migrated from the GE premium system such as Logiq E9. 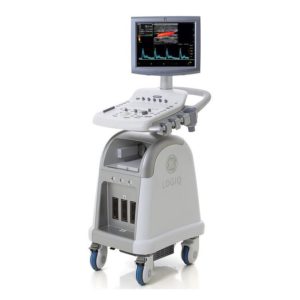 The GE Logiq P3 is a compact economy OB/GYN and General imaging ultrasound machine targeted to a value-oriented audience. The Logiq P3 replaces the older Logiq 3. 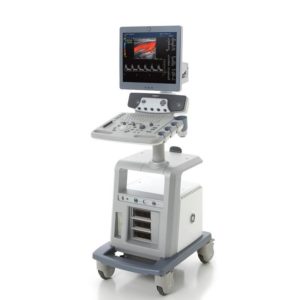 The GE Logiq P6 provides a combination of performance, ergonomics, and value to help meet a broad range of clinical imaging applications, including vascular, abdominal, small parts, OB/GYN and cardiac. The Logiq P6 is a midrange ultrasound that looks similar to the lower priced GE Logiq P5, except the Logiq P6 has several additional high-end features. The average price for a refurbished Logiq P6 is between $6,500 and $16,500, depending on the model year, the nature of past use, the system’s condition, and whether it comes with additional transducers. Scroll down to view key specs and clinical image examples for the Logiq P6, or contact Ultrasound Supply to purchase this ultrasound. 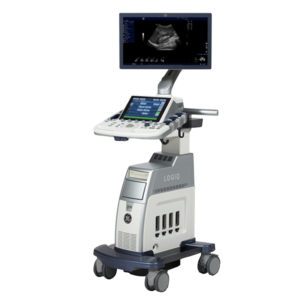 The GE Logiq P7 is a midrange ultrasound that can replace the position of Logiq P5. GE introduced Logiq P7 as a full featured, multi purpose diagnostic ultrasound. GE Logiq P7 share the same hardware and software architectures of Logiq P9 except some of advanced features such as coded contrast imaging and a couple of high perfomable transducers. The GE logiq P7 is for a customer who does not want to miss the consistent image quality, comprehensive application coverage, and ease of use that enable clinicians to make timely, confident decisions. 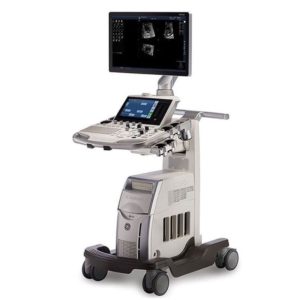 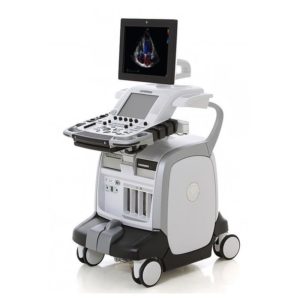 The GE Vivid E9 is the top-of-the-line premium cardiovascular ultrasound machine from GE. It has amazing image quality and the latest features including xMatrix and 4D cardiac. The E9 is the replacement for the popular and well respected Vivid 7. 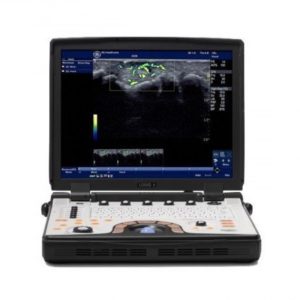 The NextGen GE LOGIQ e is one of the most popular portable ultrasound systems covering a wide range of applications. Since it launched in 2006, the GE LOGIQ e has been upgraded every year with different BT (Break Through) versions and various features and probes to strengthen its usability, especially in Point of Care applications. The LOGIQ e R7, in particular, has an outfit similar to the GE LOGIQ e BT12, except the internal H/W and S/W has been fully upgraded so that its image quality, system response time, features, and probes are one or two levels higher in quality or performance than those of the Logiq e BT12. That said, the GE NextGen LOQIG e has a price point of about $18,000 to $28,000, slightly higher than the BT12, even with the same options and probe configuration. Contact Ultrasound Supply, a Probo Medical business, about refurbished NextGen LOGIQ e ultrasounds today, or scroll down to read reviews and learn more about its specifications and features. 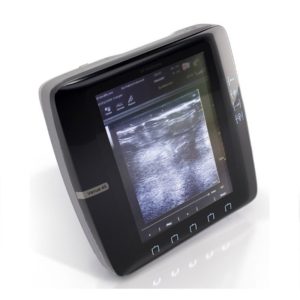 The GE Venue 40 is a hand carried ultrasound machine with a unique touchscreen integrated monitor that makes cleaning simple as there is no keyboard to clean. It is light weight and can be mounted on a wall or cart.

The GE Venue 50 is a point-of-care ultrasound machine that has an intuitive touch user interface for easy gel-and-go scanning. GE’s point-of-care ultrasounds are useful for emergency and critical-care applications because they feature automated tools for making quick decisions when imaging patients. With the GE Venue 50 ultrasound, you can simply select a probe and preset in one step. Designed for speed, the Venue 50 takes just moments to boot up and has no buttons, keyboard, or knobs to slow you down when you’re scanning the patient or disinfecting the system. The Venue 50 price ranges from $12,000 to $13,000, on average, depending on the revision, condition, years of use, and probes included. Also available is the Venue 40, a lower-tier and handheld ultrasound similar to the Venue 50. Ultrasound Supply carries a wide selection of refurbished portable GE ultrasounds for sale (and rent) in the U.S. and internationally. Contact us for more information, or browse below to see more information about the GE Venue 50’s features and specifications. 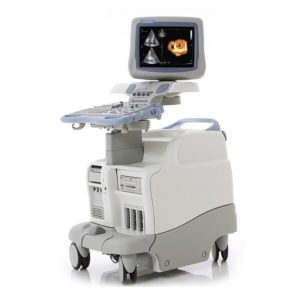 The GE Vivid 7 was the best selling high-end cardiac ultrasound machine for some time. It’s best known for it’s premium image quality, image management, and quantitative tool sets. It is no longer produced but still can be found used or refurbished. 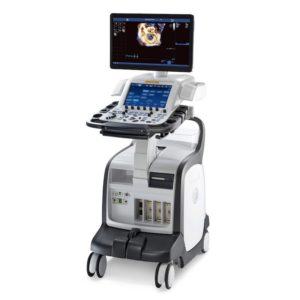 The GE Vivid E90 is a premium cardiovascular ultrasound system that takes the position of the GE Vivid E9 by integrating a new and advanced software-based image processing system called cSound as well as XDclear transducer options like the C1-6-D, C2-9-D, and M5Sc. Unlike the GE Vivid E95, the Vivid E90 does not support 4D functions. However, the rest of its features and capabilities are the same as the GE Vivid E95. Along with a more flexibly programable and powerful “cSound,” the GE Vivid E90 also delivers more enhanced auto image optimization, 2D Auto EF, AFI Productivity Package, AFI Stress, and Scan Assistant Pro capabilities than those of the GE Vivid E9. The GE Vivid E90 also achieves better ergonomics through its light weight design, intuitive control panel featuring a large 12-inch UHD multi-touch LCD screen, and freely adjustable 22-inch high-resolution widescreen OLED monitor. Although the Vivid E90 is mainly designed as a dedicated cardiovascular ultrasound system, it also covers a wide range of clinical applications through different types of transducers. (See below for a full list of its clinical applications.) In terms of price, a refurbished GE Vivid E90 ultrasound costs between $56,300 and $86,000, depending on the condition, model year, degree of past use, and what optional features or transducers are included with it. Browse below to read about the Vivid E90’s specifications, or contact Ultrasound Supply today to purchase this machine today. 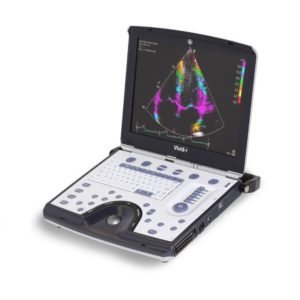 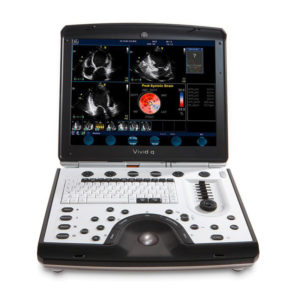 The GE Vivid S5 is a high-performance economy ultrasound machine for cardiovascular applications. It offers an innovative ergonomic design, superb image quality, advanced connectivity, productivity tools and compatibility with the Vivid-i set of transducers. The Vivid S5 is a replacement for the Vivid 3 and is a lower powered version of the Vivid S6 which it looks nearly identical to from the outside.